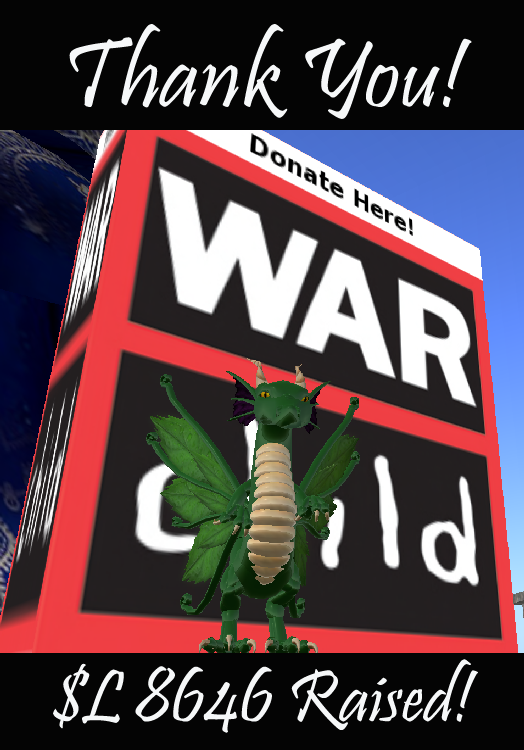 GOT PHOTOS OF THE EVENT?


Here's a great one of Shandon Loring telling a great surfing tale, all dressed in his trunks! 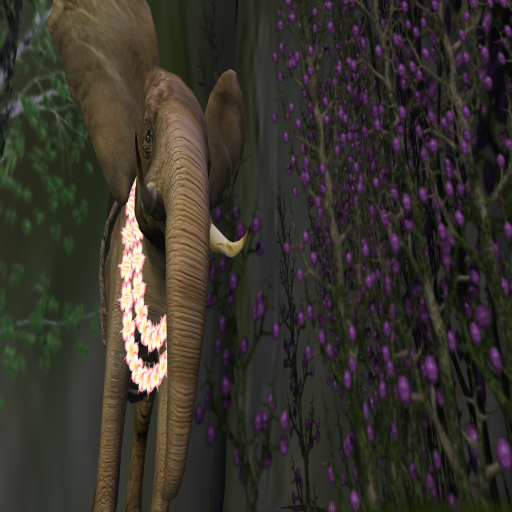 Posted by Caledonia S at 6:53 PM No comments:

Stories are an important part of who we are as human beings.  It doesn't matter whether it is a "the one that got away" tale shared over a pint, or a masterwork of literature designed to make you contemplate large life issues.  Stories help us express ourselves, and make sense of our world.  In stories, we can arrange the details so that the chaotic physical and emotional experiences of life make sense.  Stories are powerful.

Welcome to StoryFest 2014, the fourth annual gathering of great stories and presenters coming together to present six hours of adventure!  StoryFest 2014 is free, with donations going to benefit War Child North America, and is presented in a partnership between Branwen Arts, Stories Unlimited! and Seanchai Library.

Join us at the at Bran  http://slurl.com/secondlife/Bran/74/135/25
All Times SLT ~ Schedule subject to change without notice, sometimes even to those organizing! 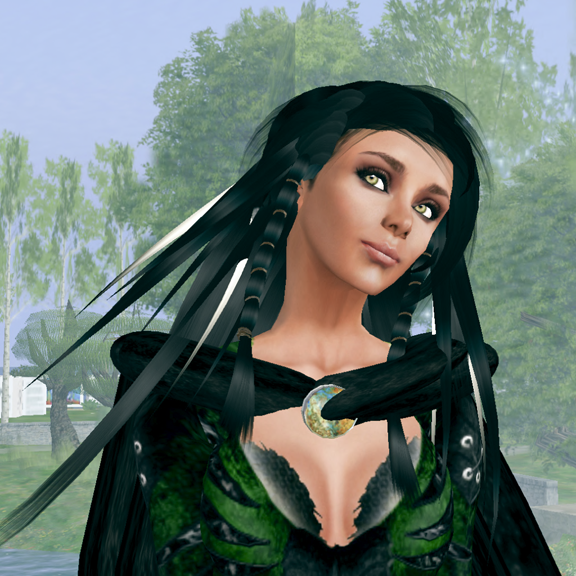 11:00am - Dubhna Rhiadra
Dubhna Rhiadra, intinerate elven storyteller and author, is known for her relaxed, soulful style and an effortlessness scholarship in her original works.  Today she shares some tales of her own, created especially for today's celebration.  Sit back and enjoy! 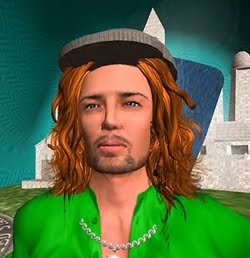 11:30am - Shandon Loring
Shandon Loring is the Chief Storyteller at SL's Seanchai Library, as well as a narrator of audio books available through Audible. In honor of World Storytelling Day 2014 theme Monsters and Dragons, Shandon presents true life monsters of the sea… "To deliberately place oneself in a maelstrom seems reckless, yet Big Wave riders rush to the raging lineup as if to a tryst. From the very first moment the big wave surfers are driven underwater by a breaking wave, they begin to die..." 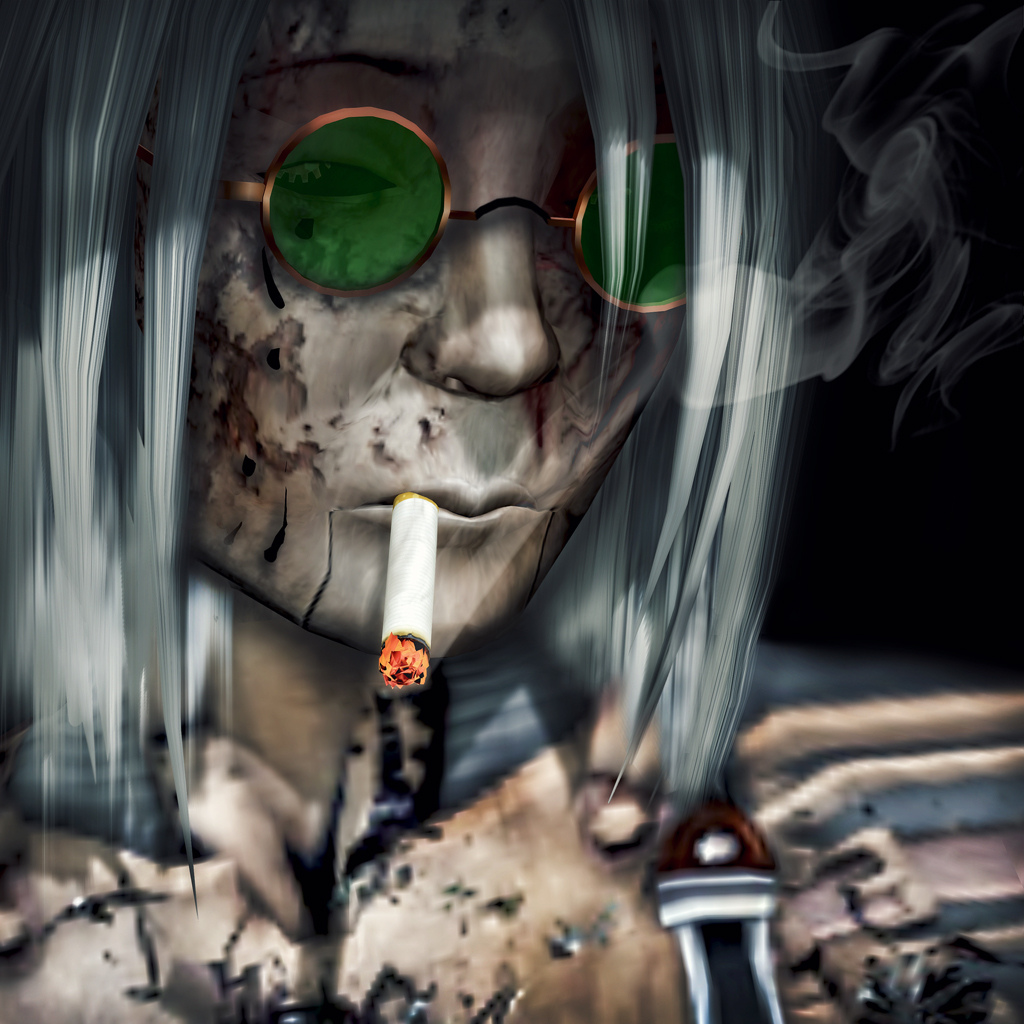 Noon - Crap Mariner
Long ago, he swore an oath to write a 100 word story every day until the day he died. He's not dead yet. Always unpredictable and irreverent, no subject is too sacred, no cow too holy for Crap not to pull it out, examine it, and bang it on the table a few times before putting it back where he found it - albeit slightly crumpled.  He's a man with a mission!  http://oneadayuntilthedayidie.com/ 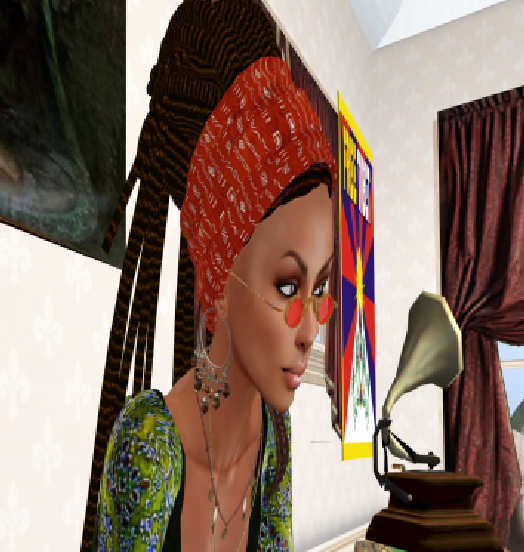 12:30pm - Lycanthia Wolfhunter
Always the student and seeker of wisdom, Lycanthia plans to share some Sufi and Buddhist teaching stories, a departure from what we typically hear from Lyca. What you learn or take away from these tales is up to you. Mostly though, she hopes they will bring a smile to your face. 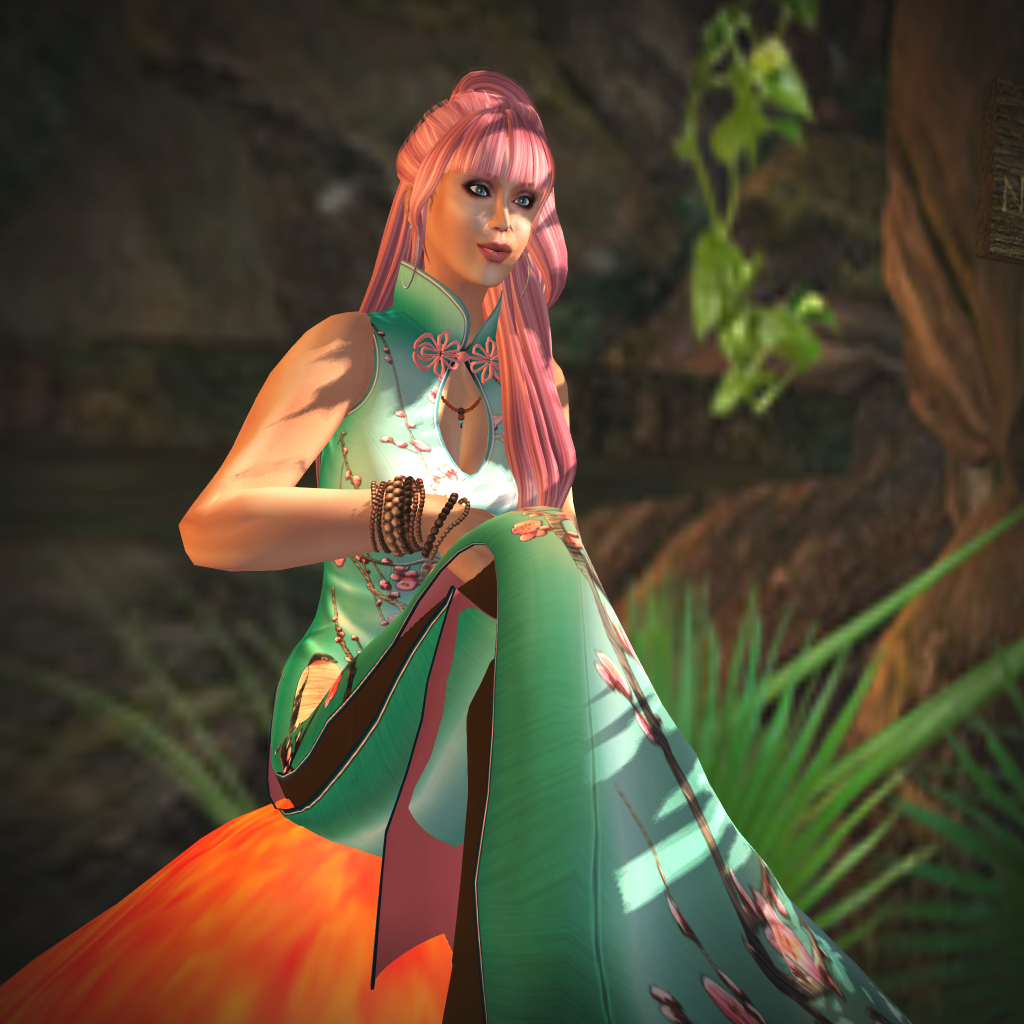 1:30pm - Luna Branwen
SL poet Luna can most frequently be found at Circe's New Poet's Sanctuary, DNA Art and Music Fusion, and also at Sounds of Poems on Cookie. She has also appeared at CeSoir, , and reads at open mics weekly. She reads at Bhelanna's Cold Shot Play group, and at the Baha'i Society of SL.  Recently she has put together a selection of original poems written for, about, or inspired by Second Life.  She will share a selection of these works with the StoryFest audience today. 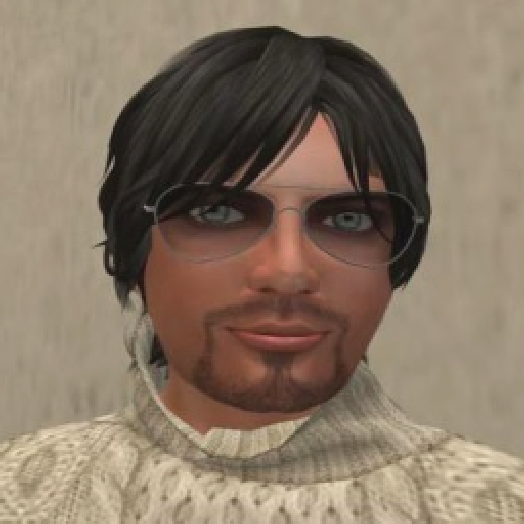 2:00pm - Corwyn Allen
Corwyn Allen has been involved with spoken and written word events since 2007 and has appeared at Seanchai Library and past StoryFest events. He is a published poet in RL, and he is also currently the Managing Director of Avatar Repertory Theater. Hewill be reading Irish stories from those collected (but not written by W. B. Yeats. They are Seanchan the Bard and the King of the Cats by Lady Wilde, the poem The Fairies by William Allingham, Frank Martin and The Fairies by William Carleton, and The Legend of O'Donoghue by T. Crofton Croker. 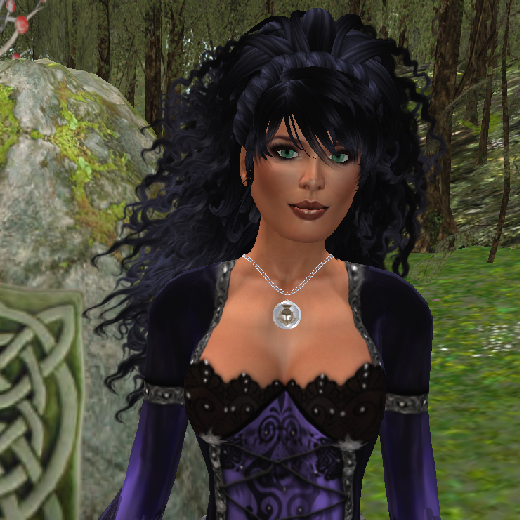 2:30pm - Skytower
has shared over 500 hours of good stories and great literature on the SL grid since 2008.  In addition to being the Library Lead at Seanchai Library, and the owner of Stories Unlimited!, she is also a company member of Avatar Repertory Theater and a self-published author in RL.  Today she gives a nod to the 2014 World Storytelling Day theme of "Monsters and Dragons" with a selection from Cressida Cowell's How to Train Your Dragon. 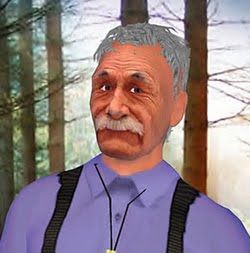 3:00pm - BigRed Coyote
BigRed shares Ernest Thompson Seton's Banertails fight with the Black Demon: In the nut forests of , practically every tree was planted by the Graysquirrel, or its kin. "Do not drink at the pond" is a Squirrel maxim, for in it lurks the fearful Snapping Turtle and the grinning Pike. Its banks are muddy, too, and the water warm. It is better to drink from some low log, along the brook itself. And do not drink in the blinding sunlight, which makes it hard to see if danger is near; then, too, it is that the Blacksnake crawls out to seek some basking place in the hottest sun.This is the story of a young squirrel who did not heed the warning of it parents and the events that followed 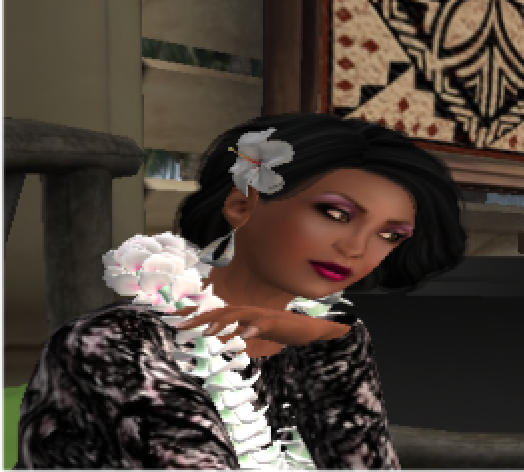 3:30pm - Kaikilani
Native Hawaiian Lani shares stories rich in the traditions and heritage of her native land and people.  Today (March 23rd) is her sister's birthday, and she celebrates it by presenting some famous  Hawaiian legends about sisters ... and if there is time, an extra story or two. Aloha! 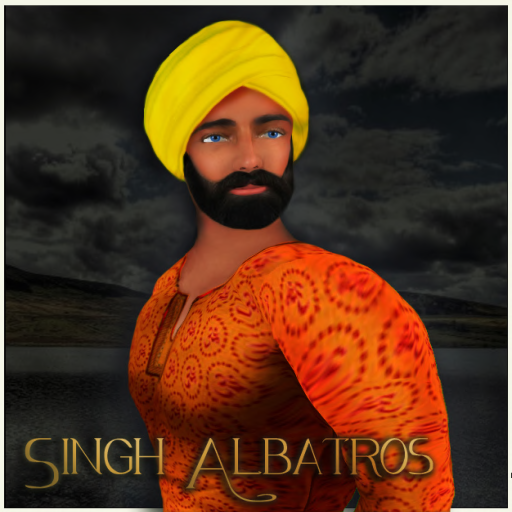 4:00pm - Singh Albatros
Singh shares a selection from his verse novel in progress - Foreign Madam and the White Yogi: a getting of wisdom love story that travels from and and back via  , , Chichester () and .  The bulk of story is however set in and is itself an epic journey into contemporary society and culture that also references the The Mahabharata, the longest poem in the world.  Singh's extensive background in music and theater are reflected in the unique soundscapes he creates to accompany the reading of his work. Don't miss this treat!
Posted by Caledonia S at 10:44 AM No comments: 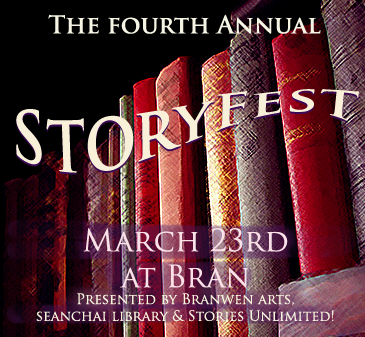 Another year of a great collection of stories and presenters coming together to present six hours of great adventures!  StoryFest 2014 is free, with donations going to benefit War Child North America, and is presented in a partnership between Branwen Arts, Stories Unlimited! and Seanchai Library.

Here are some of the tellers of tales you will hear, beginning at 11am SLT on Sunday:


All Times SLT ~ Schedule subject to change without notice, sometimes even to those organizing!


Check back for more information on schedule and stories as we get closer to Sunday.
Posted by Caledonia S at 9:09 AM No comments: